While the world is still facing the hardest moments of a global health crisis unprecedented in a hundred years, economists worldwide are predicting that the recession due to Coronavirus which has already started and will stay for a minimum of 3 years.

While the extent of this crisis is still uncertain, but four possible economic scenarios are already on the radar for when the recovery comes back to normal depicted in the form of a V, W, U or L shaped curves.

Initially economists predicted of a V-shaped recession. But looking at the scale of the damage from the pandemic as the Coronavirus advances after the lockdown opens up in several countries; new forecasts are being made, and several economists are predicting U-shaped exit or W-shaped exit and some are even predicting an L-shaped exit.

But what are these V, U, W, L Shaped Recession Curves?

The recession shapes are the graphical representation used by economists to describe different types of recession and recoveries.

This is the easiest to visualize and every government/economist would like.

These are recessions that start with a steep drop but then quickly finds a bottom, turns around and moves immediately higher. A V-shaped recession is the best possible scenario because it is “sharp and fast”.

A clear example of a V-shaped recessi 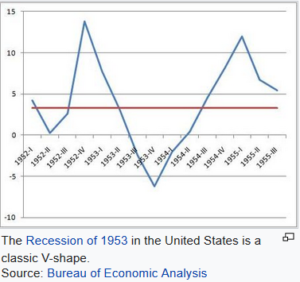 on is the 1953 U.S. Recession. In the early 1950s, the U.S. economy was booming, with average growth of 13% in 1950 and 6% in 1951, but because the Federal Reserve was expecting inflation, it raised interest rates, driving the economy into recession. In 1953 growth began to slow down, and in the third quarter, the economy contracted by 2.4 percent. In the fourth quarter the economy contracted by 6.2 percent, and in the first quarter of 1954 it shrank by 2 percent before growing again. In the fourth quarter of 1954, the economy was growing at a rate of 8 percent.

Therefore, this recession is a classic example of “V” shape.

Check out: How to keep financials on track during Coronavirus recession

The European debt crisis of the early 2010’s is a recent example of a W-shaped recession. A combination of falling business investment, rising interest rates, a weak global economy, high energy prices 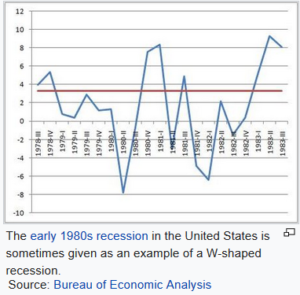 and weak consumer spending after the Great Recession of 2008-2009 tipped many Eurozone countries into a second recession from 2011 to 2013.

U-shaped recessions are recessions that begin with a slightly slower descent but then remain at the bottom for a long period of time before turning around and going back up again. A U-shaped recession is longer than a V-shaped recession, and has a less defined depression. GDP may decline for several quarters, and only slowly return to the growth trend. 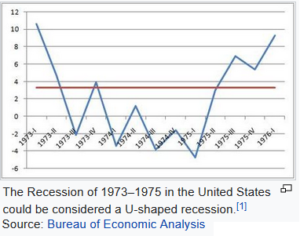 There was much speculation about a “double-dip” recession during the 2010 decade, but this was not the case, unlike many other EU countries which, as we have seen, fell into a second recession. However, in the 2010 decade there were some separate periods of falling growth quarter by quarter, but all were isolated cases of a tiny fall in GDP always preceded and followed by growth.

Read: How economy will change after Coronavirus in many countries.

No one will ever want an economy to fall into L-shaped. That’s because L-shaped recession occurs when an economy is in a big trouble and does not bounce back again for many years. This is the most serious of the different forms of recession and it is the worst case scenario because it is very difficult to return to trend growth and it takes many years to recover. 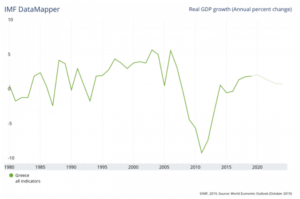 ession of 2007-2019 in Greece which is of an L-shaped. That’s because Greece technically suffered four separate, but composite, periods of contraction during the period and never returned to the growth trend until now. The Greek crisis was triggered by the aftermath of the Great Global Recession, the structural weaknesses of the Greek economy and the lack of monetary policy flexibility.

How To Start a Hotel Booking App: Traps, Bottlenecks, and Tips To Succeed