The war has erupted between the two largest economies of the world – United States and China.

Tit-for-Tat economy scenario has begun as United States has started the “biggest trade war” in history. And to start with, the first country US targeted is expectedly the China – the world’s manufacturing power house.

Accusing the US of starting “the biggest trade war in the history of the economy” by imposing tariffs of 25% which is likely to affect more than 800 Chinese products worth $34 billion worth. The products largely going to get affected are industrial machinery, medical devices, solar panels, washing machines, and auto parts.

In immediate retaliation, with equal scale, equal intensity, China imposed tariffs on U.S. export goods – including cars and large agricultural goods such as soybeans and meat. These products are worth the same as U.S. affected Chinese products.

The United States is also ready to impose 25 percent tariffs on another $16 billion of Chinese exports in the coming months, and China has promised to retaliate against similarly valuable U.S. goods.

The main objective behind trade war is to safeguard national interests and the interests of people by strengthening manufacturing in their own country. In case of United States, the anger is largely over the $500 billion a year trade deficit resulting because of Chinese goods and another $300 billion because of intellectual property theft. Tariff is actually a punishment to the China for the alleged theft of US intellectual property rights, creating fake products identical to famous US brands, steal and share trade secrets with companies in Mainland China.

The trade dispute between the world’s two largest economies has shaken markets and prompted corporate warnings about the outcome of these policies and higher price for consumers.

How will the tariffs be implemented?

U.S. and Chinese customs services will be responsible for collecting the new duties when imports pass through the port of entry. When the products included in the list of additional charges are declared to customs, the importer will pay the additional taxes.

Similar to China, Washington imposed tariffs of 10% and 25% on imports of certain aluminium and steel products from Russia.

In retaliation, Russia imposed tariffs of between 25% and 40% on a number of U.S. products in response to the tariffs adopted by the United States on imports of Russian aluminum and steel. This will affect certain industries such as road construction machinery, equipment for the petroleum sector, tools for working metal and rock drilling, as well as optical fibre.

Russian exporters’ losses from U.S. tariffs are estimated at $537.6 million.

The Russian Government, like the other complainants countries, claims that the US tariffs violate provisions of the General Agreement on Tariffs and Trade (GATT) 1994 and the Agreement on Safeguards.

Bilateral talks provide both sides with the opportunity to discuss the dispute for 60 days and to find a mutually satisfactory solution without having to take another step in the WTO dispute. If consultations fail within 60 days, Moscow can ask the WTO to establish a dispute settlement panel, which the United States can block only once.

Trump is also ready for a trade war with Europe with car import being the first to hit, which would essentially threaten another $500 billion.

Trump government is also fighting over the issue of trade with allies like Canada.

According to the world’s leading Economists, if the situation of trade war stops here, the overall impact on both the economies will be minimal even though some industries will suffer. However the further spread of trade war will cost jobs and impact growth around the world.

It would also mark a new and damaging phase in a conflict that would shake markets, worldwide, resulting in a gloomy global growth prospect.

Chinese stocks have been hit in recent weeks, entering a bear market, as concerns about the trade war have been mixed with concerns about how the current debt control campaign will reflect on economic growth prospects.

Companies are postponing investment and hiring, because of uncertainty about what happens next.

U.S. stocks will be impacted.

The tariffs are already having an effect. As an example, Chinese companies are reselling US soybeans and Chinese companies are expected to cancel most of the remaining soybean orders they have committed to purchase from the US in the year ending 31 August, once the additional levies come into effect.

Some American businesses are preparing for the impact. U.S. manufacturers and business groups have said that tariffs could increase their costs and translate into price increase for consumers.

US is one of the two largest soybean sellers in the world, along with Brazil. And China is the largest buyer of soybean – with a 60% share of total imports. If tariffs are introduced, U.S. farmers will lose competitiveness in the export market and will immediately need to find other buyers. And this will definitely impact their businesses. American companies have started worrying about the impact of the trade war on their financial health and that of the economy, even though the Trump administration says that growth should not suffer. The U.S. Chamber of Commerce estimates that “about $75 billion” of U.S. exports have been affected so far by retaliatory measures by U.S. trading partners.

Tariffs will have an impact on U.S. businesses, workers, farmers and consumers as foreign markets will close to U.S. manufactured goods and prices rise in the country.

A 10% tariff on US trade that is fully passed on to the consumer could move the global economy into a state of stagnation and reduce corporate profits by 2.5%.

Countries such as Taiwan, Hungary, the Czech Republic, South Korea, and Singapore could also be as vulnerable or more vulnerable to the risk of trade dispute. Taiwan, for example, is a hub for the technology and semiconductor industry and is home to major electronics contractors such as Foxconn, which manufactures Apple’s iPhone, among many other important devices. Electronic integrated circuits accounted for 40 per cent of Taiwan’s total exports.

Hungary, whose largest trading partner outside the European Union is the United States, enjoys large investment flows thanks to a large manufacturing base, especially in the automotive sector. Cars and motor vehicle parts were Hungary’s two largest exports in 2016, accounting for 15 percent of the country’s total.

As the world is in a better recovery mode after the global financial crisis in 2007-2008, the economic uncertainty created because of trade war could put economic recovery at risk, worldwide. 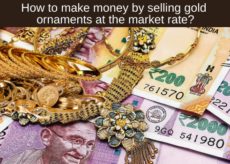 How to make money by selling gold ornaments at the market rate?